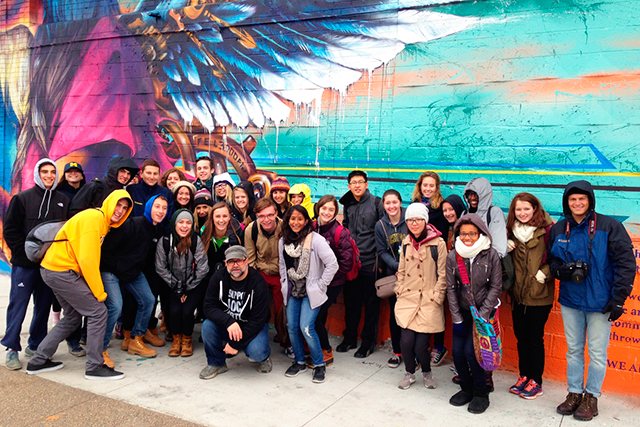 They’d come forty-five miles to stand in the cold in front of a wall. They’d been up since way too early on a Saturday morning. For almost an hour they’d stood listening to a stranger carry on about this wall, and other walls like it, about his thirty-year history with walls and aerosols. These thirty-odd students had to be freezing by now. Their instructors watched for them to lose interest or patience. But then another student piped up with a question, and the speaker launched into a new story, and they all leaned in to listen. 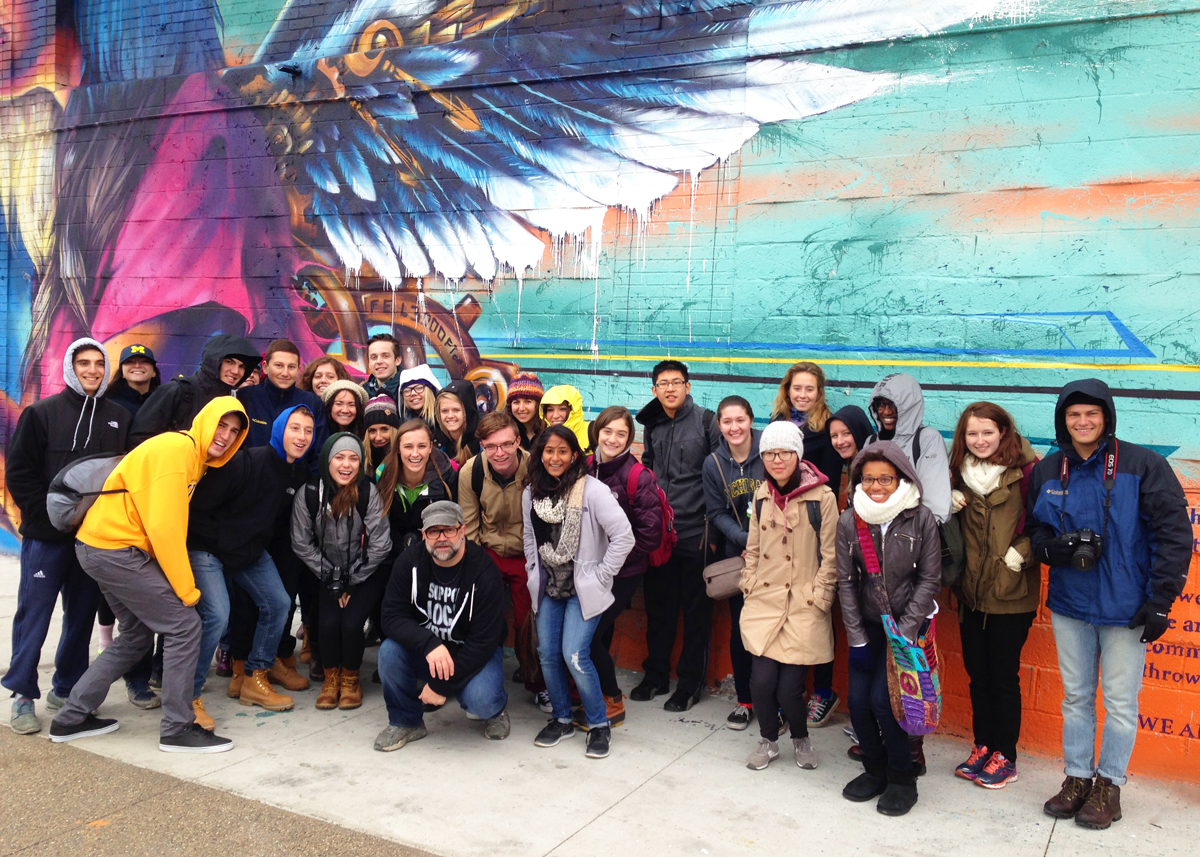 Two Sweetland instructors, Scott Beal and T Hetzel, had loaded their two sections of LHSP 125: College Writing onto a bus and brought them to Detroit’s Eastern Market. Their guest speaker was Fel3000ft, a legendary Detroit graffiti writer who had labored for eight days to complete his newest piece, this vibrant mural on the façade of the Motor City Produce building. Students and instructors alike gawked at his two-story-high woman sprouting feathers and gears as she tugged at the laces of a live heart. Fel3000ft explained how the image represented the city’s indomitable spirit. They would find this theme repeated throughout their day-long exploration of the city’s thriving arts culture: in graffiti spread throughout the Eastern Market and the Dequindre Cut; in the Detroit Industry murals by Diego Rivera at the Detroit Institute of Arts; in glimpses of Tyree Guyton out making adjustments to the Heidelberg Project despite the afternoon rain.

Bringing students to Detroit struck Beal and Hetzel as a natural fit for their classes. Both of their sections of LHSP 125 have themes that revolve around seeing, and focus heavily on the intersections between writing, place, imagery, and identity. The visit with Fel3000ft began an ambitious itinerary, which included miles of walking, two guest speakers, and at least a half-dozen stops. The trip was made possible by funding from the Lloyd Hall Scholars Program as well as a Course Connections grant from Arts at Michigan.

These students’ experience in Detroit brought them face-to-face with unique and world-class works of art, and highlighted the crucial intersections between arts and communities. Beal and Hetzel hope that an expanded understanding of the possibilities of art in public space can inform the students’ citizenship in the artistic community of the Lloyd Hall Scholars Program and the larger academic community of the University of Michigan. They also expect it to inform the analytical essays students are required to write based on their observations during the trip.

Academic writing should challenge a reader’s vision. Whether it is a scientific article, a policy proposal, or a piece of creative non-fiction, reading it should extend our seeing beyond the current edge of our sight. A trip to Detroit can challenge students’ own preconceptions – about the city, about graffiti, about what Tyree Guyton describes as art’s potential as “medicine” for a community.

Opportunities to take students beyond the confines of the University into different contexts serves to make them wiser citizens and more thoughtful writers. Perhaps the best evidence of this is the questions the students kept asking of Fel3000ft, long after their scheduled time with the artist was up, and the questions they continue to address in the wake of the trip.