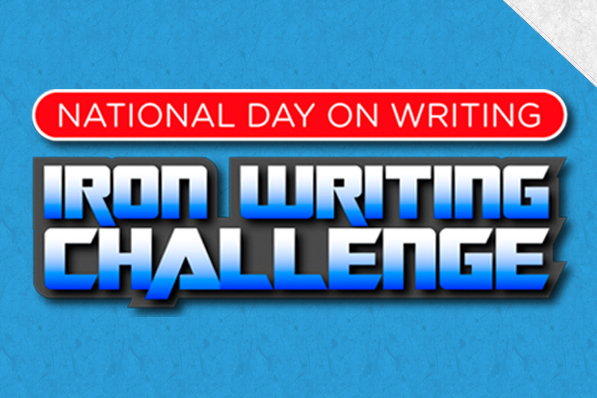 Sweetland celebrated the National Day on Writing in October by sponsoring an “Iron Writing” contest on Facebook and Twitter. Challenges asked contestants to write a six-word memoir, a haiku version of the thesis from one of their papers, a limerick about writing, and a response to the statement, “If I were to teach academic or creative writing at U-M, I would _______,” then tweet and post them throughout the day.

Entries ranged from the funny

I open a blank page in Word, Then suddenly, “oh, look, a bird!”, My mind’s out the window, I’ve got lots to write, though; I wish I was a better writing nerd!

When morals are lost Our sense of humanity Follows close behind

Encourage students to write more about the things that bother them and the things that move them. Writing in high school and college is often so focused on interpreting or reiterating what others have to say. I would want students to speak for themselves through writing.

The entries with the most “likes” or retweets won gift certificates to the Literati Bookstore in downtown Ann Arbor Sponsored by the National Council of Teachers of English (NCTE), the National Day on Writing was instituted by a U.S. Senate Resolution in 2009. To learn more about the history of the Day, tune into a podcast on Sweetland’s Digital Rhetoric Collaborative with past-NCTE president Kathleen Yancey, and read all of the “Iron Writing” contest entries on Sweetland’s Storify transcript.