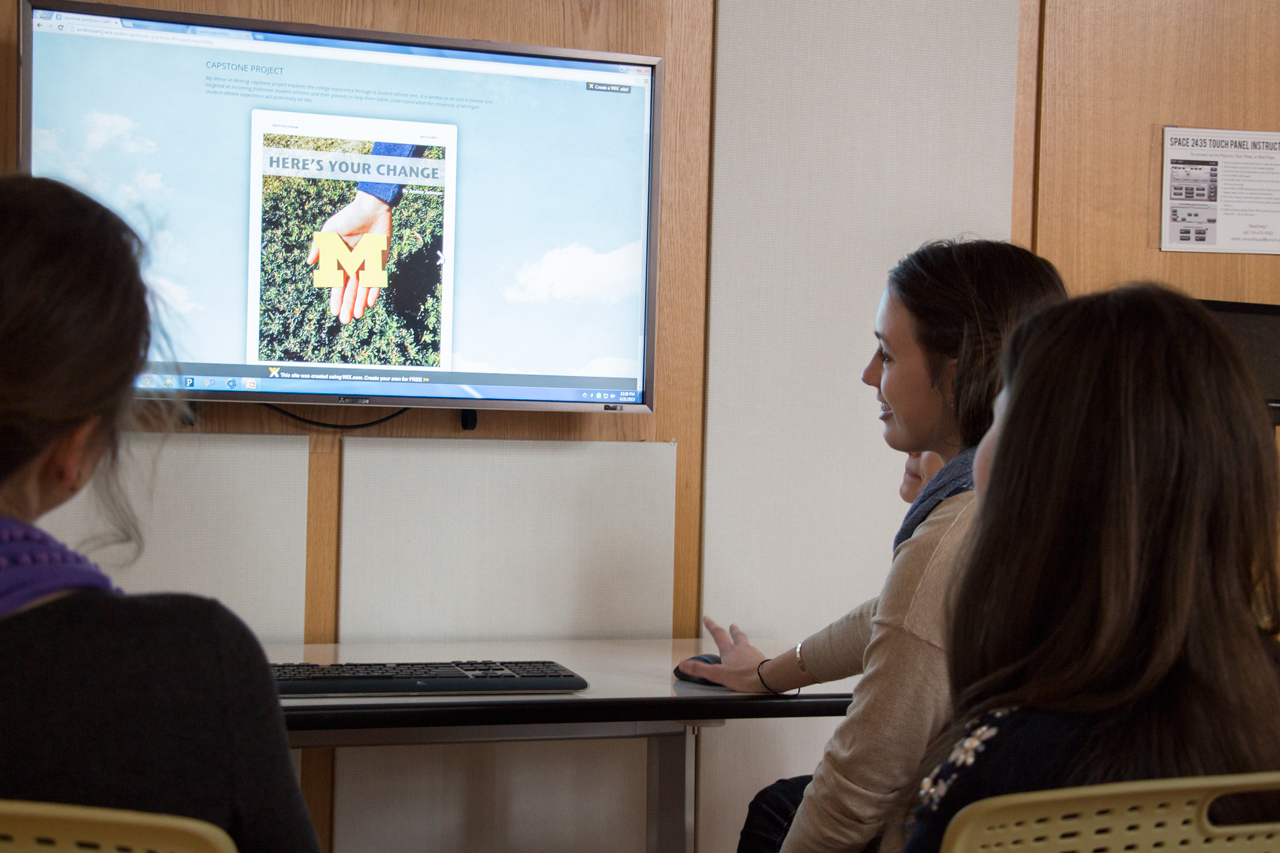 When students gain the opportunity to write something that synthesizes the disciplinary knowledge they have acquired as undergraduates and the various rhetorics they practiced in acquiring that knowledge, what do they do? The Capstone Portfolio presents students who are finishing the Sweetland Minor in Writing with just that opportunity, and this summer Julie Babcock and Raymond McDaniel investigated how these students have met it.

They did so by reading every completed Capstone portfolio to which they had access. The Sweetland Minor in Writing program first admitted students in the fall of 2011, and so there were approximately 130 portfolios to read, ponder and enjoy. Some of the patterns they found could be predicted in advance, given curricular changes that were implemented as the program developed. But some patterns proved surprising, though the biggest and most delightful revelation was the consistent quality and proof of effort the portfolios displayed, even in their most diverse expressions. In general, the quality of the projects reflects their central role in the curriculum of Capstone course and the program; likewise, their success reflects substantial work and innovation in the conception and execution of the projects themselves, often at greater length and with a greater degree of immersion than Babcock and McDaniel (and maybe even the students’ instructors) expected.

If nothing else, this suggests that students are genuinely hungry for an opportunity to enact not only their major-dependent knowledge, but the whole host of skills their education has engendered. As for the forms those enactments take, the following trend is the most conspicuous, and it concerns a fundamental choice: genre, or genres? The most successful portfolios adopted one of two genre strategies. The first – or the maximal approach – requires the very close intertwining of multiple (three or more) genres. This approach characterizes the most ambitious portfolios, and the most substantial. The alternative approach involves the opposite: the singular focus on one genre or mode, enriched with an analytical context of how the particular genre a student chooses influences and inflects the subject about which that student has decided to write.

These two approaches share an emphasis on research. In the case of those students who seek to deploy multiple genres in cooperation, research is often the best and most efficient means for them to generate material adequate enough to justify multi-perspectival scrutiny. For example, a student who wants to write about pair bonding and how we experience it in contemporary settings needs to research not only within behavioral psychology, but also within biology and anthropology, especially if she wants to do justice to the topic by producing a combination of personal narrative and journalistic nonfiction. Here, the less scholarly the genres appear to be, the greater the occasion for scholarship to substantiate and enrich those genres. Similarly, the student devoted to a single genre must make the history, norms and reception of that genre part of the research profile, so as not to reproduce a shallow or cursory version of the form to which they have dedicated their efforts.

Whether they wander far afield to combine allegedly exclusive genres or dig very deeply into the foundations of a single, narrowly-constructed genre, these Capstone students conceive and produce portfolios that astonish with their variety and with how much they can teach their readers – especially that research never ceases to be both a motivator and a method of great writing.