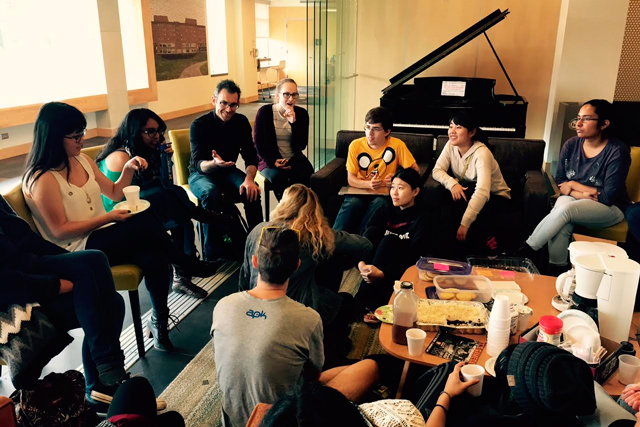 In October, the LHSP community attended the UMS production of Antigone, by Sophokles, translated by Anne Carson, marking a partnership with UMS begun by director-on-leave Carol Tell and continued by interim director, Paul Barron. Later in the year, students will attend improv and creative writing workshops with playwright Rob Drummond, and dance workshops with renowned dancer and choreographer Kyle Abraham.

Fall semester also features writer and activist Max S. Gordon, and trips by classes to Grand Rapids Art Prize (Mark Tucker) and to the gallery and street art of Detroit (Scott Beal and T Hetzel). In the newly defined role of Community Artist, filmmaker Donald Harrison will engage the community by setting up a drop-in “greemaxn screen” for students to compose imaginative clips, a camera and lighting set up to capture thirty-second interview selfies, and film takeovers of LHSP social media.

This year LHSP has initiated new campus partnerships. Two groups of students will be trained at Wolverine Press in typesetting and printing short poems and works in prose. Students from the Center for Engaged Academic Learning will conduct focus groups in LHSP to gauge the impact of arts and writing programming. And Barron is working with students via the M is 4 U Spotlight at the Detroit Center, in an effort to encourage applications from underrepresented minority students and students from under resourced high schools. Adapted from “Coffee with Carol,” “Pastries with Paul” is a weekly fireside chat with relaxed conversation, baked goods, and occasional hilarity.