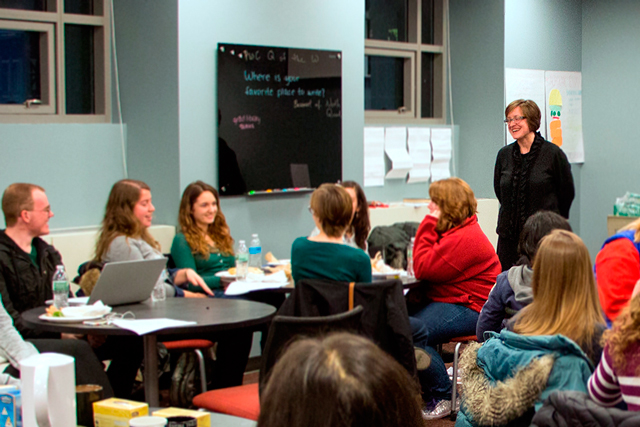 Louis Cicciarelli was named the Charles Baxter Collegiate Lecturer in recognition of his sustained record of excellence in teaching and service by the Office of the Provost .Awarded to a lecturer with an sustained record of outstanding teaching and service and a demonstrable impact on students’ lives, this is a rare honor, with no more than three awarded campus-wide in any given year. In addition to receiving the title of Collegiate Lecturer, Louis will have the opportunity to name his lectureship to honor a former U-M instructor.

Carol Tell received a 2015 Outstanding Contributions to Undergraduate Education award. This award, formerly known as the Excellence in Education Award, recognizes faculty members who are exceptionally dedicated to the educational experiences of undergraduates, and who demonstrate this dedication through achievements and innovations in their own and others’ classrooms or academic programs.

Paul Barron received a 2015 BEN Prize for the Outstanding Teaching of Writing. The Ben Prize, funded by an endowment in honor of alum and English Advisory Board member Larry Kirshbaum, is awarded each year to two Lecturers who have achieved a high level of excellence in the teaching of writing.

Teri Ford was recognized for 30 years of service at U-M.